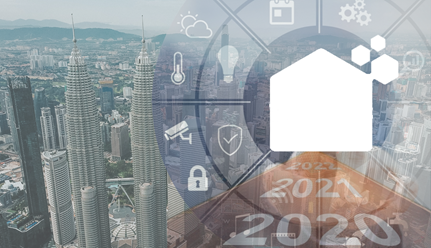 We all know how good real estate is but not many have an idea of the size which this market has on a world scale. The latest report on “Real Estate Market Size 2019/2020” by MSCI, sizes it at USD 9.6 (RM38.4) trillion, best is, this value refers to the professionally managed properties only. It might not be sufficient to multiply it by three times to have the actual value of all properties worldwide! The numbers above represent huge opportunities not only from market size and lack of tech adoption viewpoint but also considering how much the real estate industry has been since ever plagued by inefficient processes and very often useless high transactional costs strongly defended by self-interested professionals and institutions. In other words, all the professional advisors that are involved and dominate the transaction process clearly have a huge interest in protecting their income sources. From chartered surveyors to brokers and from lawyers to real estate agents all of them or at least the greatest part, have been resisting tech-driven innovations designed to ‘intentionally disrupt’ their work with the aim of making the industry more efficient and transparent! Another less known fact is that technology applied to property, nowadays known as PropTech, started long ago, in the middle 80s to be precise.

At that time, with computing becoming more and more popular together with its “fast calculating power”, the big real estate players in the US, UK, and Europe started using it to record transactions, values, historical values, and more.

However, as we all somehow know, real estate, comprising planning, construction, transaction and, management, has a strong brick-and-mortar mindset. Change and adoption of new technologies, have often been slowed down or even rejected by most of the “institutional” market players making further advancement, studies, and tech application very hard and lengthy! However, technology adoption, it doesn’t matter referred to which industry, is not something that can be stopped, only slowed down, eventually.

Notwithstanding all the barricading against it, technology adoption by the real estate industry, kept moving forward during the years between the middle 80s and 2000. Construction and project planning/design were also enjoying the innovative wave with AutoCAD and BIM (Building Information Modelling) software being developed in UK and US and start being largely used by market players.

It was only towards the end of the millennium, 1999-2000 that finally more technology innovation started making its way through towards the public, and the second wave of Proptech 2.0 begun building momentum.

Between 2000 and 2005 the UK and US real estate residential markets saw a mushrooming trend of online portals from Rightmove (the UK in 2000) to Trulia (US 2005) plenty of new players showed off with user-friendly and web-based property portals boosting the market penetration towards the consumers. During those years, these innovative technologies, leveraging on the fast-growing and affordable personal computer adoption, brought to the public online tools used search properties and make useful comparisons from the comfortability of the house or office.

The growing demand for this type of innovative service, combined with a fast-moving technology market fired up and boosted the market value of the first players and started attracting deep-pocket investors’ attention. In 2015, just to mention one example, in US Trulia was acquired by Zillow for the whopping amount of USD2.5 billion. The fuse was on and everywhere around the world, from East to West and South to North Proptech 2.0 started a more disruptive and unstoppable innovative wave.

In southeast Asia, the first players appeared between 2005 and 2007 with iProperty being launched in Malaysia while PropertyGuru appeared in Singapore. These online tools, besides helping consumers finding the right product, attracted plenty of developers and agents showing off their carnets and started generating huge business turnover. Starting from 2009, iProperty and PropertyGuru expanded their wave towards almost all countries in South East Asia while more innovative and “pain point” solving technologies appeared in more developed markets such as the US, UK, Europe, and Australia/New Zealand. The first Proptech horizontals and verticals from these countries showed how deep and substantial were the impact of innovation and technology on the real estate industry.

Interesting to compare two tables showing the before and after Proptech 2.0 to understand the high potential and future business opportunities generated by the disruptive movement of all these new start-ups.

Looking at the three areas impacted by Proptech during the 90s the horizontals/verticals table below is just highlighting the potential and/or availability of tech solutions with a simple “yes”.

During those same years, another important trend, happening everywhere in the world, played an important role in further pushing towards implementation and full adoption of new technologies. It was the rapidly growing urbanization trend combined with a refreshed direction of “Smart-city” development. The smart-city paradigm added the word smart in front of all its six pillars: people, governance, environment, mobility, economy and living.

This “smart” change opened the door to a brand-new and strong push towards a deeper and more effective impact of technology throughout all the different layers and players in the real estate industry and prepared the ground for the third disruptive hit of the Proptech wave. Before looking into what has happened to the real estate industry, it is good to understand how Fintech, that many have used and leveraged on for real estate applications, and Proptech have been overlapping and cooperating to build each other strength.

This image, sourced from an interesting paper on Proptech prepared by the Said Business School, part of Oxford University, in 2017, shows the actual positioning of the different forces which have made the Proptech growth faster and stronger. Fintech, which comes into play once the actual transaction happens, has helped new Proptech start-ups gaining the needed trust by industry players and institutional entities to become recognized first and widely used later. Nowadays most Proptech solutions are incorporating established and approved payment gateways and e-commerce payment solutions all developed by the “elder” Fintech sister.

The first kick towards Proptech 3.0 was generated by the introduction of deeper and more AI-driven big data analysis, machine learning, and blockchain. Real estate players, were mostly happy with the outcome of the introduced automation for lead generation and management (real estate agents and property developers), building management (assets managers), market trends and analytics (real estate marketers), rental and leasing solutions, and much more.

Fully integrated multi pain point solutions start appearing, and Malaysia too saw plenty of newly established Proptech start-ups offering viable solutions to all of the above. Following the from-zero-to-hero way, MPA (Malaysia Proptech Association) established in 2017 by few major players grew fast to more than 50 in the following couple of years and is today looked at as one of the major regional players.

Today, within the multiple verticals of MPA, it is possible to check the location of a project online, visit virtual sales gallery and related show units, discuss with the sales representative, book, check mortgage eligibility, receive the keys of a new property and check the possible defects and more all online.

Real estate players are now appreciating the Proptech offering of solutions for rental, id decoration, building management, big data analysis, valuation and much more and new start-ups keep on bringing to the market new and innovative ideas. Best is to keep an eye on the MPA web site here to be updated on the latest news on new Proptech solutions.

What comes next? Since the beginning of the Covid-19 pandemic, the great Lockdown and all the restrictions imposed by the new normal social distancing, technology, not only for real estate, has been moving forward with giant steps. AI is nowadays normally used to collect, analyze and elaborate data while 3D and 4D are bringing fresh air in the virtual visiting and showing of real estate products.

Keep on following us as a few more articles will walk the readers through the tech park of the future to allow a “get-fit-and-ready” for all while looking forward to this strong Proptech dawn.

The Malaysia PropTech Association represents 75+ members within the Asia Proptech sphere and helps to move this young industry forward through business opportunities, networking events, and inviting students to get engaged in this industry by offering industrial training and internships.

PropTech is Shaping the Real Estate Industry in Asia
September 10, 2021